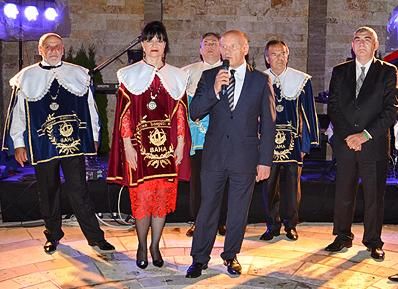 This decision was justified by the need to reward a man whose contribution had been considered on the basis of the facts related to the exceptional business results and ventures which involve a successful operating system  "ALCO GROUP" comprising ten companies, operating in six different areas and employing 2600 people. Aleksić was presented this important award in the presence of international representatives and most respected businessmen of the Balkans

The award for the best hotel in the Balkans, traditionally awarded by the association BAHA, was presented to Vesna Vlatković, a PR Manager of A HOTEL, and it was presented by Doncho Tanevski, President of the Macedonian Hotel Association following the formal procedure which included wearing the formal velvet robe of this Association.
"In the past three years, I have been in a position to receive the significant awards and recognitions on behalf of the hotel on more than twenty occasions, but this situation is special because the recognition is not only for a five-star hotel, for its owner and employees, but also for the whole country, Serbia, which is a special honor”, said Ms. Vlatković on this occasion.
The Expert Committee of the BAHA comprised as follows:  Blagoje Ragin, BAHA President and President of the Bulgarian Hotel Association,   Doncho Tanevski, President of the Macedonian Hotel Association and Nedjo Trklja, Member of the BAHA Board, including the presence of the representatives of the Serbian Hotel Associaiton Branimir Krivokapić, Georgi Genov and Jovan Nedeljković.